MBE in the World Menu

MBE is a leading third-party provider of shipping, fulfillment, print and marketing solutions to small and medium enterprises (“SME”) and consumers globally mainly via a network of independently owned and operated franchised locations.

Mail Boxes Etc. (“MBE”) was founded in San Diego, California (U.S.A.) in 1980. It has evolved over time into one of the world’s largest international networks of franchised entrepreneurs operating retail-based shipping, logistics, printing, marketing and communications solutions to business and private customers.

In 2001 UPS Inc. bought Mail Boxes Etc., and in 2003 commenced rebranding in both the USA and Canada the MBE network of retail Centers into “The UPS Store”.

In 2009 MBE Worldwide S.p.A., a family-owned Italian holding company based in Milan – Italy, which started business in 1993 as the Mail Boxes Etc. Master Licensee for Italy and then subsequently Spain and Germany, acquired the worldwide network of MBE Service Centers (except Centers in North America).

During 2018, MBE Worldwide commenced strategically acquiring majority ownership positions in operating companies of successful, existing MBE network partners. Starting in Italy, Spain and the USA, this strategy has evolved into a growing internal network of Directly Operated Stores ("DOS"). These investments in proven MBE entrepreneurs demonstrate MBE's determination and ability to capitalize on and further develop its know-how, capabilities and presence for the benefit of the entire MBE Network.

In order to drive additional long-term growth, MBE Worldwide recently announced a definitive agreement with funds managed by Oaktree Capital Management, L.P. for them to acquire up to a 40% ownership interest in MBE Worldwide via a phased €120 million ($132 million) reserved capital increase. Current MBE shareholders, the Fiorelli Family, will continue to own the majority of the business. 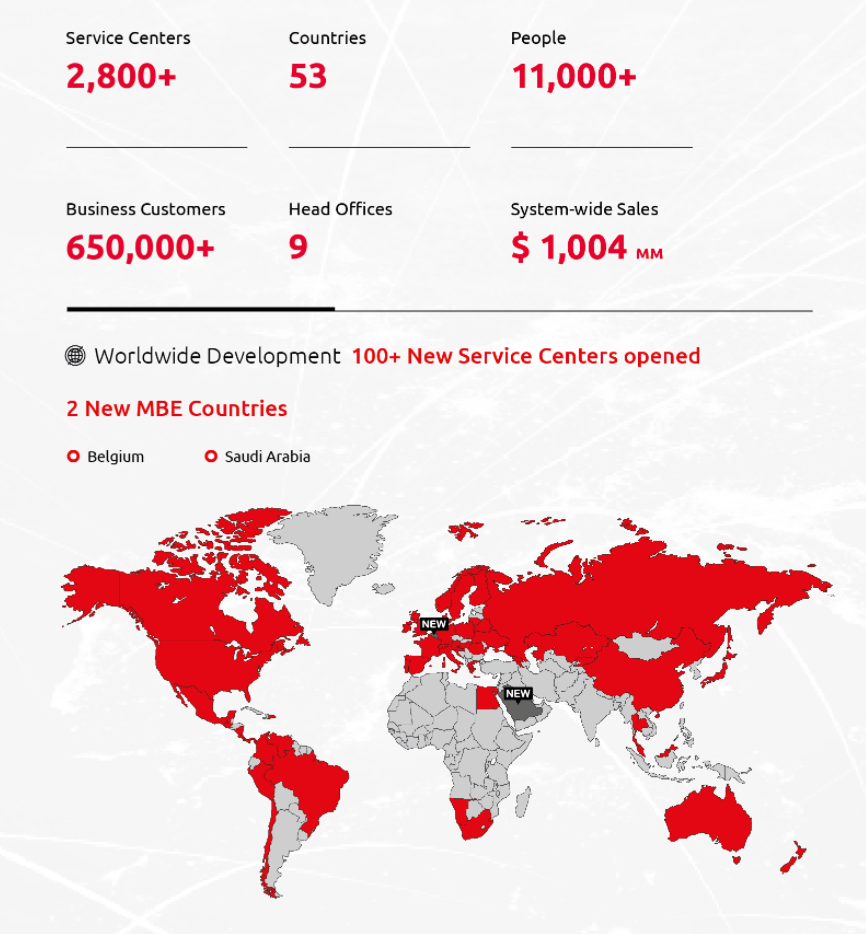 © Mail Boxes Etc. 2018 - Mail Boxes Etc., PostNet and AlphaGraphics territories and centers are operated by independent Master Licensees and/or Franchisees that operate under a franchise agreement under the brand name of Mail Boxes Etc./MBE, PostNet or AlphaGraphics. Through the franchise network, Mail Boxes Etc., PostNet and AlphaGraphics provide support services - mainly shipping, logistics, printing, marketing and communication services - for businesses and individuals. Mail Boxes Etc., MBE, PostNet and AlphaGraphics are registered trademarks used with permission of MBE Worldwide S.p.A. and its subsidiaries (All rights reserved. MBE Worldwide purchased the MBE trademark and system from United Parcel Service of America in 2009 for all areas of the world except the United States of America and Canada, which continue to be owned by UPS). The services offered by the individual Mail Boxes Etc., PostNet and AlphaGraphics centers can vary depending upon the location. The material available on this website, the information contained herein and any other relevant related data may not in any manner be copied, distributed, changed, republished, reproduced, downloaded or forwarded to third parties, without the expressed prior written authorization of MBE Worldwide S.p.A. We accept no responsibility with regard to the unauthorized use of the material available on this Internet site, the information and/or the data contained herein.
MBE Worldwide S.P.A. Registered Office: Viale Lunigiana 35/37 - 20125 Milano (IT) - Share Capital € 249.529,00 R.E.A. Milan No. 1818225 - Milan Register of Companies - Fiscal Code/VAT Num. 05393070965 Tel. +39 02 67625777 - Fax +39 02 67625778